Rolling Returns The Key to the Best Mutual Funds

Rolling Returns The Key to the Best Mutual Funds

It is not as simple as going to a mutual fund ranking portal and noting down the names of 5-star rated funds. Thats not enough!

Lets firstly see what is the problem with ranking portals and then move on to a solution.

We are going to check the trailing return of SBI Bluechip Fund-Growth for the last 1 year. What exactly do we check in this case?

We can do the same for periods like 3 years and 5 years.

To summarize, the following are returns of SBI Bluechip Fund-Growth for the last 1, 3 and 5 years

This is akin to saying Virat Kohli scored X, Y and Z runs in the last T20, ODI and test match respectively.

But should Kohlis batting ability be judged by his final score in the last game in played in all the formats?

Kohli is someone who is known for his consistency.

Its great that he scored a century in the last test matches but that is not sufficient.

To assess his test match format performance, we probably need to go back 40-50 test matches (more the better). All the scores he made in these Test matches need to be taken into account.

Then and only then shall we be able to say something about Kohlis consistency.

The problem with ranking portals:They rely on trailing returns of mutual funds to rank them.

Now, why is it important to go all the way back? Dont we know about Kohlis consistency already?

Lets say, in the last T20, ODI and test match, Bumrah somehow scored more runs than Kohli. Does that make Bumrah a better batsman than Kohli? Absolutely not!

This means that if a fund A did better than another fund B in the last 1,3,5 years, it is not necessarily a more consistent fund than fund B.

So, the average scores in all three formats over the last many matches will help us establish Kohlis consistency over Bumrahs.

This is the reason why mutual funds should be compared using rolling return and not trailing return.

Lets jot down the scores of two imaginary batsmen 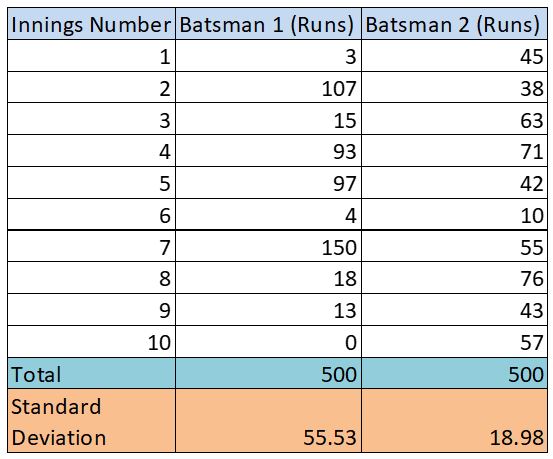 Both the batsmen have scored 500 runs in all. This makes their average scores the same 50.

However, if we have a quick glance at their individual scores, we find that batsman 2 has beenextremely consistent.

Batsman 2 doesnt have any hundreds to his name. But all his scores except one are greater than 35. So, he can be relied up on in every match unlike batsman 1.

Lets now see what the last row is all about in the table.

Standard deviation is an indicator of the volatility of the scores.

As we saw, batsman 1 has scores all over the place. So, his standard deviation is high at 55.

Batsman 2 has scores that are mostly close to each other. So, the consistency is higher and standard deviation is way lower at 19.

So, an investor should have a look not only at the rolling returns but also the standard deviation.

Lets say you are looking to make a choice between two large cap funds.

Your choice of large cap fund should ideally have a higher rolling return along with a lower standard deviation.

Which fund would you choose from among the following large cap funds?

Most investors would choose SBI Bluechip Fund and thats not wrong!

However, a few investors would select ICICI Prudential Bluechip Fund. This wouldnt be wrong either. Simply because some people care more about volatility than returns.

To get to the right answer for you, you need to have a good understanding of rolling return and standard deviation to make the right call.

Which fund would you choose from among the following funds?

Well, for starters, Mirae Asset Emerging Bluechip Fund is the newest of all the funds listed. It started in 2010. So it has enjoyed the entire bull run that we are in currently.

On the other hand, Franklin India Smaller Companies Fund started in 2006. It faced the entire brunt of 2008 financial crisis.

Nonetheless, the most important point I am looking to make here is

For example Would it be right to compare the batting average of Virat Kohli with that of Ravindra Jadeja? Absolutely not!

Ravindra Jadeja doesnt get to face as many deliveries as Virat Kohli does. Moreover, he is not a pure batsman like Virat. He is an all-rounder.

But would it be fair to compare the batting average of Virat Kohli with that of Rohit Sharma. Yes!

Because neither is at a great disadvantage and both are pure batsmen.

So, it is prudent to compare the rolling returns and standard deviation of fund in thesame category.

Other factors to consider are time period of the comparison should be same. As we saw, Mirae Asset Emerging Bluechip Fund, apart from being a great fund, has existed only when we have seen a continued bull run.

Comparing two funds for two different periods is another mistake you should avoid.

The funds need not have started in the same year. You can consider the NAV data for the maximum possible period.

Now we are in the perfect position to introduce another important mutual fund parameter Sharpe ratio. It would be criminal to not do so now.

Developed by William Sharpe,Sharpe ratiois the most accepted metric to measure risk-adjusted returns.

The simple idea is to compare the returns of a mutual fund to the risk-free rate of return the market offers. And add a risk parameter to these parameters.

The deeper we go into our quest for thebest mutual funds, the more we realize how difficult it is.

SIP or lumpsum in mutual funds: What should you prefer?

What is the best time to redeem your mutual funds?

NIFTY 50 is at all-time high, but my mutual funds…

Hi, I think the Sharpe Ratio has another shortcoming: while calculating the risk-free return, its only the yield on the govt bond thats considered. Ideally, it should include the yield and the mark-to-market gain/loss on buying and selling such instrument. One needs to look at just the last 1-2 years to see how volatile the yields and consequently the values of long duration instruments like the 10 year bond have been to get a sense of the bearing it has on the overall return on such investments.

You hit the nail on the head, Vishal 🙂 Thanks for sharing our thoughts!