Bull run: Here are 5 banking mutual funds you can place your bets on

With the market being driven by high liquidity, led by domestic as well as Foreign Institutional Investments (FIIs), the banking sector is one to cash in on.

The Indian markets are riding a strong bull rally that have taken the equities to its lifetime highs. Sensex closed the week on May 26, 2017 at a record high of 31,028.21, coinciding with the three-year anniversary of the Modi-led government.

The market is being driven by high liquidity led by domestic as well as Foreign Institutional Investments (FIIs).

In fact, the FII numbers this year reflect record highs with investments for the five months equalling to double the amount of all 12 months of 2016. 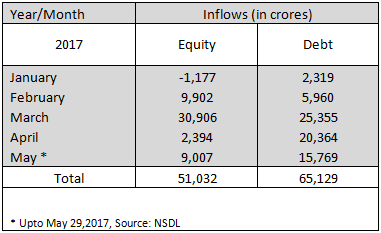 In March, the FIIs even hit a high of Rs 30,906 crores thereby making India a hotspot for investments over strong economic reforms and good fundamentals.

FIIs own a big chunk of equity markets and their bullishness is a good signal of where stock indices are likely to be heading towards in the coming months.

Returns from Indian equities have surpassed that of global markets in the first quarter of 2017 with a return rate of 12 per cent year-to-date. The second in line is China with less than half of Indias return rate at only 4.4 per cent.

Market experts say that consumption will be key driver in the light of high liquidity in the coming days propelled by select sectors.

One such sector is the banking and finance one that is likely to be buzzing.

In the Union Budget 2017, development in the affordable housing and infrastructure is most likely to accentuate growth in banks and housing finance companies.

Further, the Banking Regulation Act has given the RBI more autonomy to intervene in the stressed banking sector and directly tackle banks with high Non-Performing Assets (NPAs), low growth and stressed loans.

This could be a major revival for most commercial banks.

Additionally, credit growth is expected to pick up going forward on the back of a good monsoon, says Deepak Jasani, Head – Retail Research, HDFC securities.

On being asked about NPA regulation, Deepak said: The RBI and the Govt are sincerely attacking the issue of growing NPAs and one will have to see the efficacy of the latest move – amendment to the Banking Regulation Act and the impact it has on the borrowers willingness to come to the negotiating table to settle sticky debts.

The Centre has outlined about Rs 5.8 lakh crore as capital expenditure for the current financial year.

Banks are a proxy for growth in an emerging market like India. Hence if one is bullish on India, one has to be bullish on Banks and so Bank Nifty, he adds.

Hence, banking and finance funds could perform considerably well if these reforms prove to be fruitful, coupled with stellar performances in the equity markets.

Here are top 5 banking mutual funds (equity) that will reap good returns, according to Value Research:

Managed by Deepak Gupta, this fund has a one year return of 55.9 per cent according to Value Research with 99 per cent equity asset allocation and 99.93 per cent Banking/Finance sector holding.

Holdings are led by State Bank of India (SBI) that has 62.08 per cent allocations, followed by Bank of Baroda, PNB and Canara Bank.

This portfolio has recorded a 3.13 per cent return since launch and a 268 per cent turnover.

From the Reliance fund family, this fund is managed by Sanjay Parekh and Shrey Loonker since 2013.

The fund has received 17.28 per cent returns since its launch with an 84 per cent turnover.

Rated a five-star by Value Research, this fund is from the benchmark Nifty finance service with an asset worth of Rs 1,100 crore as on Apr 30, 2017.

The fund has a high return and risk rate with a minimum investment of Rs 1,000.

The mutual fund boasts a one year return of 40 per cent.

Sectoral allocation of this fund comprises of banking/finance and manufacturing companies led by ICICI Bank and YES Bank.

Another five-starrer according to Value Research from the ICICI Prudential Mutual Fund family, this fund has delivered an absolute return of 23.6 per cent in the first half of 2017. Last year, the total returns were 21.7 per cent.

The fund is expected to give a 53.83 per cent return in one year with a high risk and return tag as per Value Research.

This fund has a 82.05 per cent equity allocation and an 80.67 per cent banking/finance sector allocation led by HDFC Bank followed by SBI and ICICI Bank.

From the TATA Mutual Fund family comes a fund with 85.47 per cent banking/finance allocation and a 8.35 per cent manufacturing allocation.

The fund is led by HDFC Bank, holding 9.30 per cent followed by YES Bank and Muthoot Finance.

The fund gives a one year return of 42.7 per cent as per Value Research.

Reliance Jio plans to bring 5G internet to your smartphones

India Inc to get 9.5 per cent salary hike this year

Five tips to get a good salary hike this year

Will Facebooks digital currency give legitimacy to Indian crypto-startups?