Gerald Celente: The lack of independence of the Federal Reserve should be clear to everyone by now.

After 10 years of an euphoric spending binge, costs across the board are starting to become an issue. No soonerdid we coverhow Silicon Valley start-ups are starting to have to squeeze the most out of every dollar thanBloomberg reportsthat todaysnew hedge fund managerflies economy and stays in hostels.

Take Brant Rubin who started a hedge fund last year and quickly found out that his fundraising wasnt covering his overhead -andthat his corner of the market was falling out of favor with his LPs and regulators. He told Bloomberg:Its not as lucrative anymore. Burning money is uncomfortable, particularly as we dont have unlimited money to burn. But I believe in our business.

And so, as a hedge fund manager, hes constantly trying to get the most out of every dollar. Hes a Columbia Business School graduate that stays in hostels when he travels and flies budget airlines like Norwegian Air. On the ground, he opts for subways and public transportation instead of using Uber. His shop is above a steakhouse in Covent Garden, a more touristy area of London than the Mayfair district, where most older established hedge funds are. 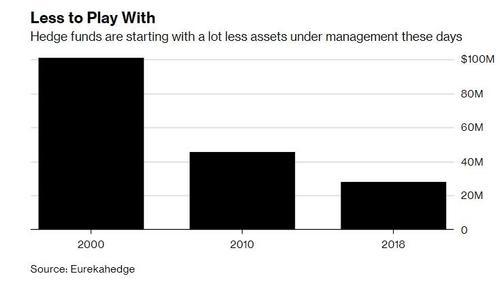 According to Simmons & Simmons, a law firm representing three quarters of the UKs largest hedge funds and half of Americas biggest managers,$50 million under management doesnt cut it anymore for paying your overhead. The firm says that many hedge funds now require at least $200 million to make their bills. And the average size for new funds is down 72% to $28 million since 2000, according to Singapore-based data provider Eurekahedge.

In other words, an unsustainable trend for new asset managers.

Vaqar Zuberi, head of hedge funds at Mirabaud Asset Management stated: Investors flock to two or three large launches every year, leaving the rest to slog through managing modest assets, waiting to either prove themselves or praying for a better asset-raising environment.

Pension funds and large investors usually dont even look at hedge funds until they have a three year track record and at least $100 million under management. Other funds are feeling the pressure, too. Stephen Hull and Kevin Connors shut down Ibex Capital after two years when they lost a large client this month, despite the fund managers resumes including working at places like Goldman Sachs.

Meanwhile, the industry itself continues shrink, pressured by investors demanding returns: 580 hedge funds closed over the last three years while only 550 launched. During the industrys best years in the 2000s, more than 1000 hedge funds were starting up per year. 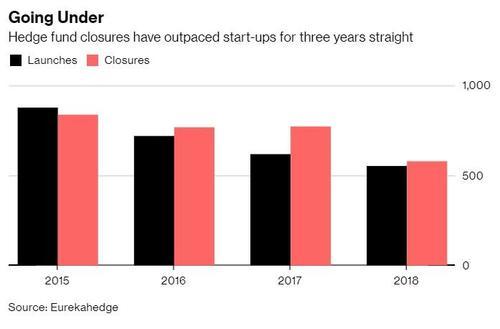 Much of this remains attributable to the fact that most hedge fund have been unable to generate alpha for the past decade, their returns lagging low-cost index funds. The average fee has fallen from 2 and 20 to 1.43% and 16.93%, on average, according to data from Hedge Fund Research. As a result,outflows from hedge funds have reached almost $100 billion since 2016.

But there are funds still starting up that believe they have a niche, like Jeff Henriksen, who is starting a three-person team called Thorpe Abbotts Capital. They are looking to hire students, instead of more seasoned analysts, to do research in order to save money.  He told Bloomberg:We pay the interns, but not as much as wed have to pay to hire analysts. You have to be creative.

Other start-ups, like Irene Perdomos Devet Capital, are finding a way to make it work. She started her fund with $750,000 out of a spare room in Wimbledon. Now the former trader and her partner are managing over $100 million out of the very same space. They either travel to meet clients or invite them over, when necessary.

Theres a lot of biased information about people trying to sell you things, and a lot of it you really dont need when youre starting out, she concluded.

It would be very wise of you to study ourdisclaimer, ourprivacy policyand our (non)policy onconflicts / full disclosure. Heres ourCookie Policy.