Please note that the posts on The Blogs are contributed by third parties. The opinions, facts and any media content in them are presented solely by the authors, and neither The Times of Israel nor its partners assume any responsibility for them. Please contact us in case of abuse. In case of abuse, 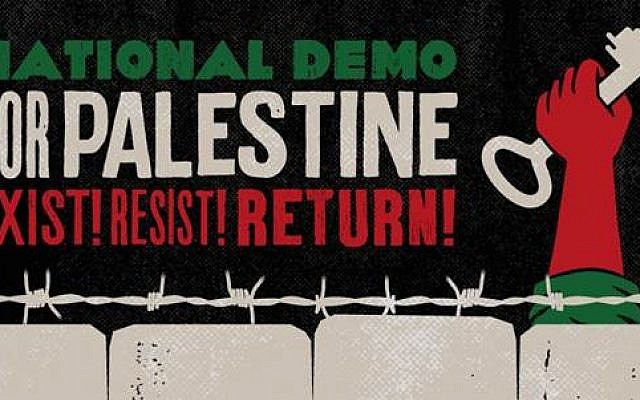 On Saturday 11th May the Palestine Solidarity Campaign (PSC) will hold a rally in London supported by ten British trade unions and Momentum, the pro-Corbyn faction in the Labour Party. The rally is not campaigning for the establishment of a Palestinian State or improving the situation in Gaza. Instead it is focused on the return of Palestinian refugees. One advert for the rally is a raised hand clutching a large house key (representing the house keys Palestinians say they took into exile with them in 1948).

This is a call for an absolute Right of Return, to give the seven million descendants of Palestinians who left Israel during the 1948 War of Independence the right to go to Israel. This is not a call for peace, it is a call for the end of Israel as a Jewish state.

There is no similar right of return for the 50 per cent of Israeli Jews who are descendants of a similar original number of Jewish refugees who fled for their lives from North African and Middle Eastern countries in the same period.

This demand for an absolute right of return is not compatible with the concept of two states for two peoples a Jewish-majority State alongside a Palestinian-majority state the only way to resolve the conflict and respect the right to national self-determination of both the Jews and the Palestinians.

Return as demanded by this demonstration would either create two majority Palestinian states next to each other, or a one state solution. Either would result in the end of Israel as a Jewish and democratic state.

Israel can never agree to this and the demand acts as a barrier to negotiating a final peace settlement. Demanding something impossible locks the Palestinians into a status quo where they are stateless and suffering.

Its a cynical tactic of radical movements since the Bolsheviks to make transitional demands, seemingly reasonable slogans that are in fact undeliverable in practice through peaceful means, and hence persuade their supporters that only violent change can deliver the wishes in the slogans.

For demonstrators living in the comfort of London to march behind slogans that trap Palestinians in their current situation by making demands that are only possible through the destruction of Israel is shameful.

Descendants of Palestinian refugees need help and support, but their only way to resolve their status is through a negotiated peace agreement. This might include return for a limited number of humanitarian cases, compensation, return to the West Bank, and full citizenship in other Arab countries (other refugee communities from the 1940s are fully integrated into their host societies, not languishing as second class citizens in permanent limbo as Palestinians do in the Arab world).

Bringing justice to and peace between the Palestinians and Israelis requires serious policy solutions acceptable to both sides, not fantasy slogans about mass return to Israel.

The message from this demonstration is not negotiations and peace. It is a recipe for more violence.

Luke Akehurst has been the Director of We Believe in Israel since 2011. We Believe in Israel is a broad coalition of over 19,000 supporters of Israel. Outside of work he was a Councillor in Hackney in East London for 12 years, has stood for Parliament twice and served on the Labour Party National Executive Committee. He was previously an award-winning Director at global PR company Weber Shandwick.

Report with 15,000 cases of alleged antisemitism submitted to EHRC